A songwriting legend of the highest caliber, Van Morrison comes to Fox Theater Oakland on Wednesday 14th November 2018 for two nights of hit songs from his incredible career! The "Brown Eyed Girl" singer is known for his rich voice, intelligent lyrics and beautiful melodies, and is loved by fans ranging from generation to generation! Book your tickets now to see this incredible performer live! 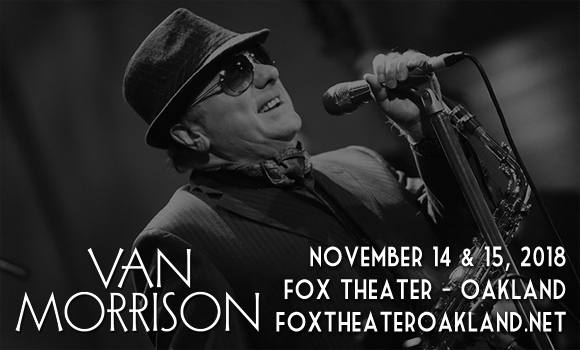 Van Morrison is a Northern Irish singer and songwriter whose music career began as a teenager in the 1950, when he played multiple instruments (guitar, harmonica, keyboards and saxophone) in various Irish covers bands, performing the hits of the time. In the 1960s, Morrison became the lead singer of the Northern Irish R&B band Them, who found minor success with the classic garage-rock hit "Gloria" (1964), which was subsequently covered by a wide range of artists, including Status Quo, The Doors, AC/DC, Patti Smith, Jimi Hendrix and many, many more. Three years later, Morrison found his first taste of solo success when he released his debut single, "Brown Eyed Girl", which quickly became a Top Ten hit. His 1970 album Moondance cemented Morrison's popularity in the mainstream, and throughout the rest of the 1970s he had a string of hit albums. Morrison has received two Grammy Awards over the years, as well as the 1994 Brit Award for Outstanding Contribution to Music, and he has been inducted into both the Rock and Roll Hall of Fame and the Songwriters Hall of Fame. He was knighted for services to the music industry in 2016, his full title being Sir George Ivan Morrison OBE.