Melanie Martinez is back with a brand new album, and she's coming to Fox Theater Oakland on Wednesday 13th November 2019! The doll-like performer's K-12 album has been four years in the making and has an accompanying full-length film, which just adds to the already theatrical and otherworldy aspect of her performance! Martinez will be joined for the tour by special guest support act, indie-Americana performer Lauren Ruth Ward! 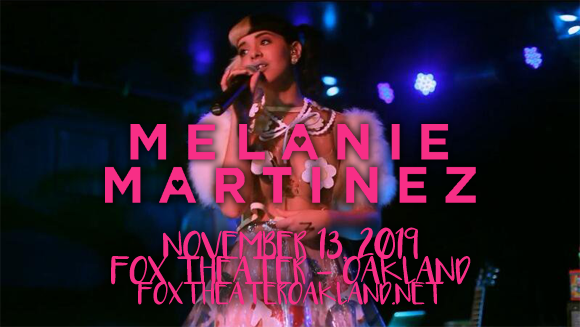 First finding fame when she appeared as a contestant on the televised talent competition The Voice, American art pop singer-songwriter Melanie Martinez made her debut in 2014 with her platinum-selling debut single "Dollhouse". The success of the single led to Martinez signing with Atlantic Records, and she released her debut EP, also called Dollhouse, on the label later that year. The EP peaked at number four on the Billboard Heatseekers Albums chart and launched the gold-certified single "Carousel". In 2015, Martinez released Cry Baby, which was also certified platinum, and launched the singles "Sippy Cup", "Mrs. Potato Head", "Cry Baby", "Pity Party" and "Soap". 2019 sees the release of Martinez's second studio album, K-12, which will be accompanied by a full-length film.