Jazz sensation Diana Krall comes to Fox Theater Oakland on Saturday 21st September 2019 on her 2019 Fall Tour! The world-renowned singer, pianist and five-time Grammy Award-winner will be drawing upon her illustrious career to bring you an evening of top quality entertainment in the form of jazz standards and carefully selected covers, aided by her phenomenal backing band! 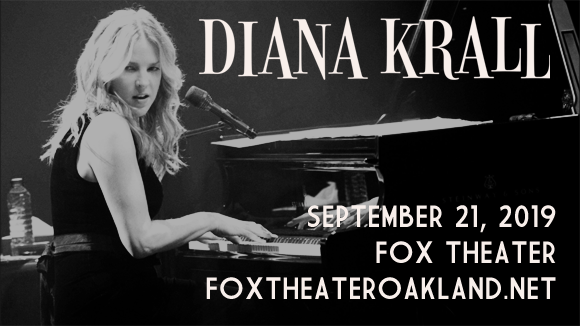 After making her name performing in Los Angeles cafes throughout the 1980s, Canadian jazz pianist and singer Diana Krall released her debut album, Stepping Out, in 1993. Three years later, Krall's career was boosted when her third studio album, All for You: A Dedication to the Nat King Cole Trio (1996), was nominated for a Grammy Award and went on to chart on the Billboard jazz charts for an extensive 70 weeks. From there, she began to make huge waves in the jazz world and to date she is the only artist to have debut eight albums at number one on Billboard's Jazz Albums chart. She has had nine gold, three platinum, and seven multi-platinum albums certified by the RIAA, and has won five Grammy Awards and eight Juno Awards, among many others. Krall's most recent album was a joint efort with superstar veteran performer Tony Bennett, Love Is Here to Stay, which was released in 2018.