There's excitement in the air for Walk The Moon fans, as they embark on the Press Restart Tour in support of their hotly anticipated new album What If Nothing! The pop-rock quartet comes to Fox Theater Oakland on Saturday 10th February 2018 for a night of hook-laden songs that will have you dancing all night long! 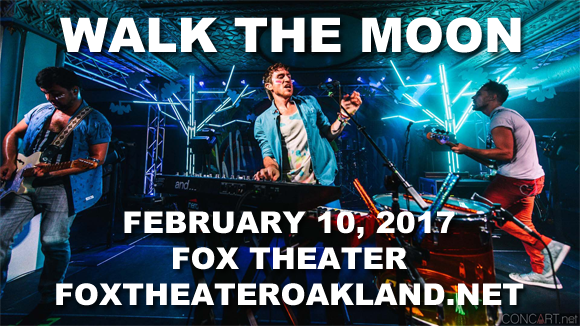 Cincinnati rock band Walk The Moon was formed in 2006 by lead singer Nicholas Petricca while he was a student at Kenyon College. The band's debut album, i want, i want, was released independently in November 2010, launching the single “Anna Sun”, which brought the band popularity and was subsequently re-recorded for their self-titled major label studio album debut in 2012. Their second major-label studio album, Talking Is Hard, was released in 2014 and includes the song "Shut Up and Dance," which hit number 4 on the Billboard Hot 100 and reached number one on the Billboard Rock Songs chart and Billboard Alternative Songs chart. The band's most recent album, What If Nothing, is slated for release on November 10th 2017.