Don't miss your chance to see Snakehips at Fox Theater Oakland on Tuesday 24th October 2017! Tipped to be the hottest show of the year, Snakehips is quality entertainment at its best! It's time to bring 'All Your Friends' and get down for this crowd jumping night ahead! There are still tickets left, but don't delay – as previous shows have shown – they WILL sell out! Come and sing along to big tracks such as "Days With You" "All My Friends" "Don't Leave" and so many more as they are blasted out… it's going to be huge! 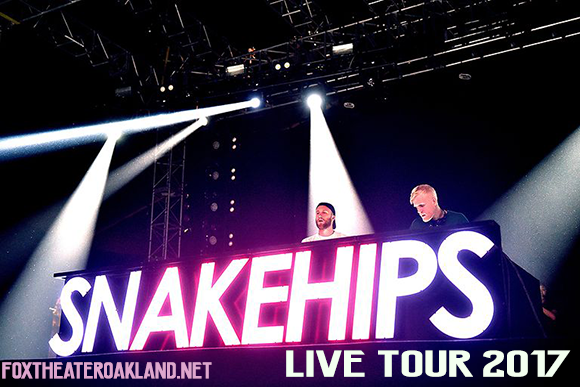 The British Duo, Snakehips are currently taking over the world with their incredibly catchy anthems and to continue to appreciate and showcase their exciting music, they are taking to the US for a tour this coming Fall! Get ready to catch them at a venue near you! The time is NOW!

"Even if you haven’t heard of the names that make up Snakehips, consisting of Oliver Lee and James Carter, you’ve almost definitely heard their singles and remixes blowing up your radio as far back as 2014. Their 2015 banger ‘All My Friends’, featuring Tinashe and Chance the Rapper, peaked at number 5 on the UK singles chart, and since then they’ve charted with the likes of Zayn Malik and Danish singer-songwriter MØ on tracks ‘Cruel’ (2016) and ‘Don’t Leave’ (2017). We were excited to see what their live set had in store, and we were not disappointed."