Iconic rock star Robert Plant brings his Carry Fire Tour to Fox Theater Oakland on Wednesday 28th February 2018 in support of his exciting new album of the same name! With a voice that has topped countless "Greatest" lists, and a stage presence that has set him apart as a legend of our times, Plant is a true showman – don't miss your chance to see him live! 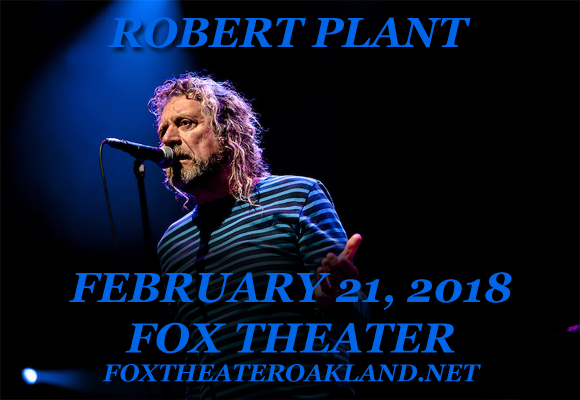 Regarded as one of the greatest vocalists in the history of rock and roll, Robert Plant is an English singer, songwriter, and musician, best known as the lead singer and lyricist of the rock band Led Zeppelin. Appointed a Commander of the Order of the British Empire "for services to music" in 2009, Plant began his musical career in the mid-1960s, singing with various bands until he met drummer John Bohnam in 1968 and formed Led Zeppelin. Led Zeppelin released their self-titled debut album in 1969, an album which is often credited as spearheading the heavy metal movement. Plant sang with Led Zeppelin until the band dissolved in 1980, following the death of Bonham. He then pursued a successful solo career and, to date, has released eleven studio albums, two compilation albums, three video albums, four collaborative albums and 42 singles.