Are you ready Oakland??? The notorious gender-bending, genre-blending, authority-defying shock rocker that is Marilyn Manson is back on his Heaven Upside Down North American tour!! Coming to the Fox Theater Oakland on Monday 23rd October 2017 – DON’T miss out!! Grab your tickets quickly while you still can – hurry, they won’t last long!! 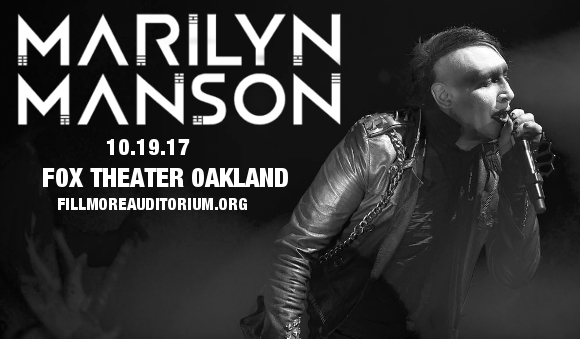 Starting out as Marilyn Manson and the Spooky Kids in 1989, the band grew in popularity (and infamy) throughout the 1990s, where they were blamed for corrupting children across the USA with their often aggressive, blatantly irreligious music and lyrics. This didn’t deter the band, however, who went on to achieve one success after another with albums such as the ferocious “Antichrist Superstar,” and the super-slick Bowie-inspired “Mechanical Animals”.

Get ready to hear all the new material from Marilyn Manson’s upcoming 10th album, “Heaven Upside Down” live onstage – book your tickets TODAY!!!