Renegade rapper M.I.A. comes to Fox Theater Oakland on Thursday 2nd November 2017 as part of her AIM Tour – her first in the US since 2014! The British superstar will be performing hits from her new album AIM, which is reported to be her last, so don't delay in booking your tickets!

“It’s my last record so I wanted it to be happy. There’s no complains on it. [It’s] another side to me completely. I don’t know if people know [about] that.” – M.I.A. 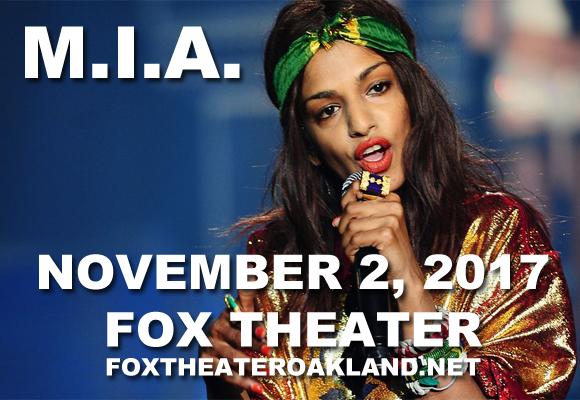 Sri Lankan Tamil British rapper, singer-songwriter, record producer, and activist M.I.A. began her recording career in 2002 when she released a six-song demo tape that included the songs "Lady Killa", "M.I.A.", and "Galang", which were later featured on her debut album Arular, released in 2005 to widespread critical acclaim. To date, M.I.A. has released 5 studio albums and she has been nominated for an Academy Award, three Grammy Awards and the Mercury Prize.