What better way to ring in 2019 than with the G.O.A.T. Queen of hip hop and neo-soul, Ms Lauryn Hill?! Hill comes to Fox Theater Oakland on Monday 31st December 2018 for a very special New Year's Eve performance of her record-breaking, five-time Grammy Award-winning, smash hit album The Miseducation of Lauryn Hill! An album dripping with wisdom, fierce intelligence and love, The Miseducation of… has seen many through the rollercoaster of life, so start your New Year as you mean to go on with a performance you'll never forget! 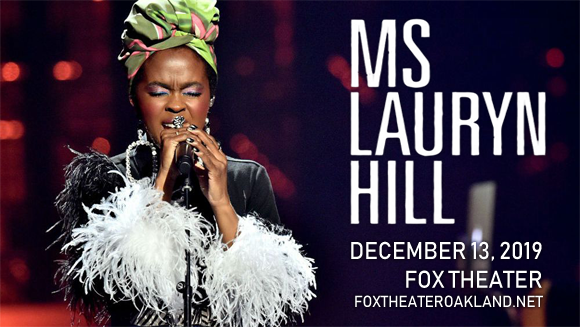 American singer, songwriter, rapper, record producer one of the pioneers of the neo-soul genre and has been regarded by many as one of the greatest rappers of the 1990s. In 1993, Hill signed a record deal with Columbia/Ruffhouse Records as a member of hip hop group The Fugees and found international fame starring alongside Whoopi Goldberg in the film Sister Act 2: Back In The Habit. Three years later, The Fugees released their sophomore studio album, The Score, which was a worldwide hit, selling over 17 million copies internationally and winning a Grammy Award for Best Rap Album. Their 1996 hit “Killing Me Softly”, one of three hit singles from the album, also won a Grammy Award for Best R&B Performance by a Duo or Group with Vocals. In 1998, Hill released The Miseducation Of Lauryn Hill, her first and only solo studio album, which featured the singles "Doo Wop (That Thing)", "Ex-Factor" and "Everything Is Everything". It debuted at number one on the Billboard 200 and earned her a record-breaking ten nominations and five awards at the 41st Grammy Awards, including Album of the Year, Best R&B Album, Best R&B Song, Best Female R&B Vocal Performance, and Best New Artist. A live album, MTV Unplugged No. 2.0, followed in 2002.