Having unleashed the previously unreleased tracks "Perfecto Miserable," "Alone, Omen 3," "(Don't Let The Dragon) Draag On," and "Energy Fleets" upon the world in his short film Hey World!, King Krule comes to Fox Theater Oakland on Wednesday 8th April 2020 as part of an extensive North American tour! The enigmatic, lo-fi, artistically unique performer brings something wholly original to the table and is a must-see act – a star that's on the rise! 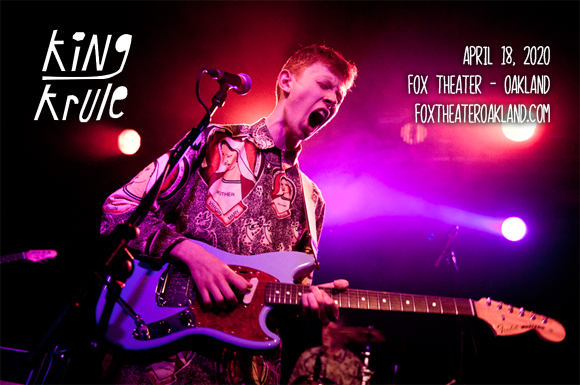 Marshall began making his first recordings under the name "Zoo Kid", culminating in the mixtape U.F.O.W.A.V.E. Later in 2011, Marshall started performing with the moniker King Krule, and after several successful performances, he was nominated for the BBC Sound of 2013 poll in December 2012. 2013 saw the release of his debut album (as King Krule), 6 Feet Beneath the Moon. Two years later, he released the hip hop album A New Place to Drown under his own name. The Ooz, Marshall's second King Krule LP, was released in October 2017 and was named the best rock album of 2017, and the third best album overall of 2017, by Pitchfork that December. King Krule was nominated for the Mercury Prize in 2018.