Two years after the release of her critically-acclaimed mixtape Pop 2, and five years since her last album (2014's Sucker), British alt-pop sensation Charli XCX comes to Fox Theater Oakland on Wednesday 2nd October 2019 on the Charli Live Tour! The tour promotes her brand new third studio album, Charli, which features some incredible guest collaborations, including her single with Troye Sivan, "1999", and her latest hit, "Blame It on Your Love" ft Lizzo! It's gonna be next level! 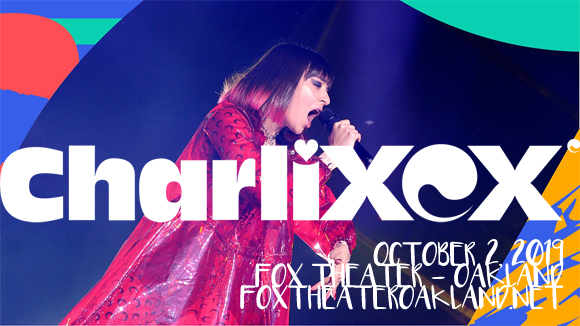 English singer, songwriter, music video director, and record executive Charli XCX began her career in 2010 when she signed with Asylum Records. After releasing a string of singles and mixtapes over the following years, she found international fame in 2013 when her single with Swedish DJ duo Icona Pop, "I Love It", was a top ten hit in several countries around the world. Her debut studio album, True Romance, was released later that year. In 2014, XCX had another international hit with "Fancy" by rapper Iggy Azalea (on which she sang the song's main hook), which finished the year as one of the best-selling singles worldwide. 2014 also saw the release of her follow-up album, Sucker. Her third studio album, Charli, is due for release this year and is preceded by the singles "1999" ft. Troye Sivan and "Blame It on Your Love" ft Lizzo.