Get ready for some very exciting news; none other than experimental ambient electronic artist Bonobo, with incredible support from The Range, is coming to Fox Theater Oakland on Wednesday 12th April 2017, in support of his brand new album, “Migration,”!!! Get your tickets now for what’s guaranteed to be a sell out show – hit the “Buy Tickets,” button above to be sure of your place!! 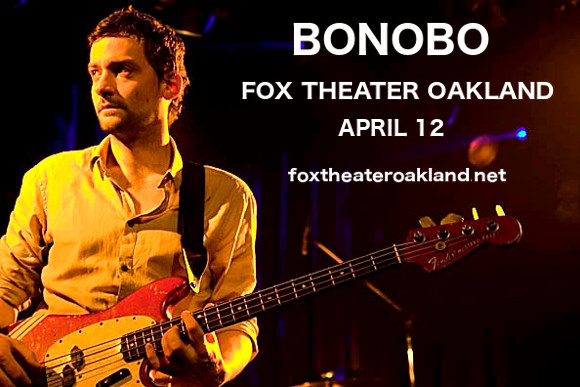 English musician Simon Green grew up in the countryside, establishing him with a sense of peace and introspection that he has brought to his music. His first release, the entirely self-produced and self-instrumented “Animal Magic,” brought him to the attention of “Ninja Tune,” who released his subsequent albums “Dial ‘M’ For Monkey” and “Days to Come,” both of which were used in tv series and commercials, helping to further his career, leading up to his fantastic fourth album in 2010, the highly innovative “Black Sands.” With its gamelan, afrobeat and middle eastern musical influences it truly captured the attention of audiences and critics alike!! Since then, Bonobo has gone on to release several more successful albums, developing a devoted following worldwide and touring to play for them live, gaining repute for his live performing style. Unique among electronic artists, he favours organic sounds, playing live with a 12 piece band who recreate live versions of his studio recordings. Seeing Bonobo live is a completely new experience, unlike anything you’ve ever heard before – make sure you don’t miss it!! Get your tickets to see Bonobo TODAY!!!