Pink Floyd fans, prepare for the show of a lifetime!!! It’s that time of year that we've all been waiting for as the Australian Pink Floyd Show are back on tour with their “Best Side Of The Moon,” show, hitting the Fox Theater Oakland on the Tuesday 29th August 2017! Get ready for an unforgettable night by booking your tickets in advance today! This is a hugely anticipated event, so book early – tickets won’t last long! 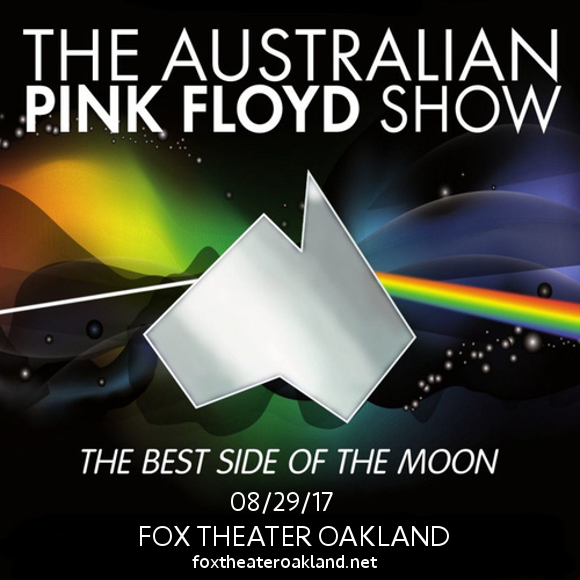 Formed by guitarist Lee Smith in Adelaide, South Australia, with the current line-up consisting of Steve Mac, Colin Wilson, Jason Sawford, Paul Bonney, David Domminney Fowler, Mike Kidson, Lorelei McBroom, Emily Lynn, Lara Smiles, Chris Barnes and Ricky Howard. Gradually gaining more and more of an audience as their skills and reputation grew, in 1994 Pink Floyd vocalist David Gilmore saw the band perform at the Fairfield Halls in Croydon, and was so impressed he later invited them to perform at his 50th birthday party!!
You couldn’t get a higher recommendation for a Pink Floyd tribute band than a glowing review from a member of the original Pink Floyd – the Australian Pink Floyd act are, without a doubt, the best Pink Floyd tribute act in the world.